Cut to the Chase: How far does Bond Commute in his Films? 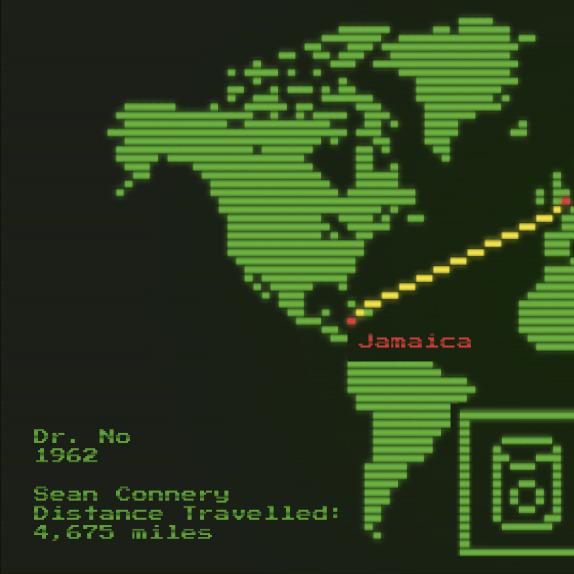 Usually, here at Simply Paving, we're all about everything paving related. However, we're also huge James Bond fans and couldn't be more excited for this year's release!

The next Bond behemoth, No Time To Die is set to hit our screens this year (fingers crossed). Looking back on 25 exhilarating years, Bond has travelled to exotic locales, even shooting up to space in the seventies - but he always arrives back home, safe and (mostly) sound.

And while pesky travel restrictions remain in place, our restless wanderlust got our minds wondering; how many miles has 007 racked up in his illustrious career? Armed with a calculator, model globe, and a tub of popcorn, we at Simply Paving endeavoured to find out how far Bond travelled in some of the franchise’s biggest box office hits.

Dr. No introduced us to the gun-toting, martini-swigging icon that we know and love today, with his first mission among the peaceful sands and clear sea of Jamaica.

A blissful picture of what future Bond missions might look like, this setting is certainly worthy of any postcard (secret nuclear base notwithstanding).

You won’t find any globe-trotting antics here, however. Bond travels only 4,675 miles direct to Kingston - and stays there for the length of the film. After all, if you can defeat the villain, save the world and kiss the girl all in one convenient location, then why not save yourself some air miles? Dr. No’s finance team certainly think so.

With gold-painted femme fatales, deadly bowler hats and all manner of impressive gadgets (by 1960s standards, at least), Goldfinger is Bond in full swagger.

And this time, 007’s exhausting adventures take him all over the world, hopping from continent to continent. We’re talking drug busts in Latin America, nuclear bombs in Kentucky and, ahem, rounds of golf in London (even James Bond needs a hobby).

It’s a steady 13,345-mile round trip that ends exactly as you’d expect; Bond refusing rescue efforts to catch a few moments of privacy with the inimitable Pussy Galore in the middle of the ocean.

In a first for the series, You Only Live Twice sends our favourite Brit into exotic new territory: the Far East. But instead of discovering himself on a gap year, Bond is tasked with preventing all out war between Russia and the United States.

Starting with a daring escape in Hong Kong, 007’s mission takes him from the swanky hotel bars of Tokyo to Kyoto’s cherry blossom-laden paths. As such, Bond’s passport doesn’t see too much wear on this 2,182-mile journey.

With Sean Connery’s decision to retire from James Bond (definitely, 100% permanently), the mantle of 007 was passed to George Lazenby for On Her Majesty’s Secret Service.

Lazenby’s first and only outing as the iconic super spy takes him all over Europe, from the sandy beaches of Lisbon to the snowy peaks of the Alps and then back again. That’s a weighty 3,474-mile round trip that requires some very creative packing (Speedos and skis!?).

But all’s well that ends well, and Lazenby’s Bond finally gets hitched in Portugal, breaking the womaniser tradition of previous films – even if she does get gunned down moments later. Perhaps it just wasn’t to be, George.

The Man with the Golden Gun marks Roger Moore’s second appearance as the sleek super spy – and the first time 007 has received a golden bullet in the post.

His investigation into who sent him this thoughtful gift takes him ever further east, travelling from London to Lebanon to China to Thailand. The final leg of Bond’s journey (via seaplane, obviously) takes him to the remote island of Khao Phing Kan for a fateful duel with Christopher Lee himself. A few shots, a suitcase-related death and a steamy romance later, the credits roll on 007’s lengthy 8,366-mile adventure.

An odyssey for the ages, Moonraker boldly goes where no James Bond film has gone before (or since): outer space!

But before all that, Bond must investigate the theft of a space shuttle on terra firma, travelling from Los Angeles to Venice to Rio de Janeiro. However, it is only when 007 blasts into space that he discovers a plot to commit worldwide genocide!

As you’d expect, sending James Bond on a camp sci-fi adventure in outer space really racks up the air miles (an eye-watering 17,960 miles, in fact). Yet, even when commuting by rocket, Moonraker is not the furthest Bond has travelled in the franchise. That accolade goes to Quantum of Solace.

While many remember A View To A Kill as an all-out American adventure, this Bond flick actually begins in an altogether different country of red, white and blue: Russia (or, more accurately, the U.S.S.R.). It is here where Bond first sets his sights on hell-raiser Max Zorin.

From Russia (with love) to California, Bond’s mission is chocked-full of vertigo-inducing scenes up on iconic landmarks. First, there’s the stop-over in Paris with the ‘Eiffel Tower jump’, then onto San Francisco, where Bond and Zorin take to fisticuffs atop the Golden Gate Bridge. Thankfully, Bond merely accrued 12,000 miles in this film, giving him plenty of energy for that final wallop.

Timothy Dalton’s second mission as 007 was a little bit rocky to say the least.

The film starts in Florida with a drug lord crashing Bond’s friend’s wedding, which (as you can imagine) he takes exception to. One incident with a shark tank later and Bond becomes a rogue agent, following the villainous drug lord over 3,300 miles on a personal vendetta, first to the sun-soaked Bahamas and then to the fictional Republic of Isthmus in Central America. His travels conclude with a heart-racing chase across the desert, which includes bi-planes, drug-fuelled tankers and a fateful machete fight.

After such an exhausting adventure, Bond was then free to do what he does best; get drunk and flirt with women at a party.

Eight years later, Bond is found sunning it up in Monaco, trying to prevent an attack helicopter from getting nicked. His historic failure sparks a globe-trotting adventure full of adrenaline-pumping activities worthy of any stag party. These include tank joy-riding in St. Petersburg, sight-seeing in Florida and satellite hurling in Cuba. 007 is even joined by his old friend, Sean Bean for the second half of the trip, although it’s not the tearful reunion you’d expect.

By the film’s end, Bond has racked up over 9,600 miles for his troubles; a breathless debut for our beloved Brosnan.

Starting in Prague, Bond hops over to Madagascar to cause an international incident, before jetting off to the Bahamas for sun, sea and poker. The real game is in Montenegro, however, where 007 survives machete-wielding henchmen, poisoned martinis and financial ruin to defeat the villain and get the girl. Afterwards, Bond retires in Venice (after just one mission?) only to make a dramatic return at Lake Como a few days later.

Phew, over 21,000 miles and Daniel Craig is just getting started.

Picking up exactly where Casino Royale left off, Quantum of Solace takes 007 on his longest journey yet, covering a massive 24,847 miles.

Bond speeds through Sienna, gets debriefed in London and heads to Austria to watch a bit of opera – and that’s just the first act! The film really gets going when Bond jumps from Italy to the Bolivian desert, chasing the titular bad guy, Quantum, to his evil lair. Finally, 007 makes the measly 8,000-mile trip back across the world to Russia for a quick chat with his deceased ex-girlfriend’s traitorous other half.

With all that travelling, we’re pretty sure Bond’s jetlag was the real villain all along.

The latest film in the franchise (we’re still waiting on you, No Time To Die), Spectre pits an ageing James Bond against his legendary archnemesis, Blofeld.

The action kicks off with Bond foiling a terrorist bomb plot in Mexico City, a heroic feat that’s rewarded with a job suspension. Undeterred by his rocky employment status, 007 hops from London to Rome to Austria to Morocco, tracking the shadowy organisation led by Christoph Waltz’s Blofeld. Bond is then captured, tortured and promptly freed for a fateful final showdown back in London. That’s 14,767 miles - and Bond can’t even claim it back on expenses anymore.

Not everyone has the wanderlust of a MI6-funded super spy and, sometimes, settling down in your own outdoor oasis beats murder and intrigue in the tropics.

If that sounds like you, then a good quality patio could be key to creating that peaceful retreat you aspire to have. Browse our extensive range of paving slabs today, for a taste of luxury living!